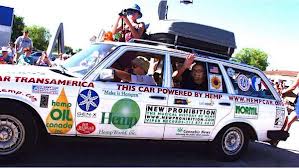 Cannabis sativa, or hemp, is a variant of the cannabis plant commonly known as marijuana. Unlike marijuana, hemp contains almost no THC, which is the psychoactive chemical that causes the high of marijuana. The THC content in hemp is usually between .2%-.3%t, while the levels in marijuana can be above 15%. With such low levels of THC, hemp cannot be ingested in any manner that would give the user a high and thus the uses of this plant are much different from its sibling marijuana. The uses of this plant are quite broad and parts of it can be used to make clothing, milk, rope, and fiberboards for construction, paper, and amazingly enough, even biofuel. However, the belief that the two sibling plants are the same leads to the various issues surrounding growing industrial hemp. Currently, 8 states, Colorado, Maine, Montana, North Dakota, Oregon, Vermont, Washington and West Virginia have defined industrial hemp as distinct from marijuana and have allowed it to be grown. Still, federally this is illegal and for hemp to be produced and harvested to the scale it is in Canada will take changes to be made through the voting system. The main issue seen with legalizing hemp is that policy makers and those in the government do not want to look like they are approving marijuana when approving hemp. No matter the difference between the two, most still see them as linked and legalizing one could cause political setbacks.  Even so, there are many supporters of industrial hemp. Many see the benefits of growing and harvesting hemp as a crop. They want hemp to be grown and used due to the fact that it can be make many products more environmentally friendly than they currently are. Hemp can replace cotton as a material in clothing and can replace wood to make paper and other building materials. However, there are some supporters of hemp that support hemp because they believe legalizing hemp would farther along the legalization of marijuana. These are the people who cause issues because it gives policy makers more of a reason to not support hemp so that they do not inadvertently support marijuana. Still, when debating the issue over industrializing hemp, one needs to know the facts that I stated above. Hemp and marijuana are not the same and should note treated as such. Hemp could help to reverse the greenhouse effect and reduce the harm that using energy has on the environment. In addition, a large push for growing hemp comes from those who support farmers. This is because growing hemp would be much more profitable for farmers and could help reverse the ill effects the bad economy has had on farmers’ profits. In addition, hemp would be much better for farmers to harvest than other plants. This is because little to no pesticides or herbicides need to be used due to hemp being naturally hardy. Hemp also has a very short growing time period (3-4 months), which means farmers could grow more and harvest it faster than the crops they currently harvest. More hemp can be grown in the same area than cotton and other crops, thus making it much more space efficient. Overall, for the United States to benefit from industrial hemp, people need to separate it from marijuana and consider the good growing it could do for our country.